The New Perspective on Mary and Martha gives Mary and Martha a total makeover. No longer is this familiar passage about prioritizing spiritual pursuits over the tyranny of the practical. The results of a close reading of the text and careful exegesis of the Greek has Martha escaping the kitchen and Mary is not even in the house! Martha is still overly worried, not about housework, but over the much more understandable concern about her (younger) sister. Mary, who is out of the village, follows her call, ministering on the road with Jesus. Luke 10:38-42 is about discipleship, ministry, trust, and the new family of Jesus.

Book Review by Judith A. Diehl

Priscilla Papers Vol. 28, No.2  Book Review by Judith A. Diehl
​
​Recently, as I was listening to a Christian radio station, the female announcer shared that she was feeling guilty about her busy life. She made reference to the biblical “story of Mary and Martha,” typically feeling at fault because she was not taking ample time to “sit at Jesus’ feet” properly. She went on to say that Martha had it wrong because she was more concerned about her chores than she was about being in the presence of the Lord. These two sisters are examples, one positive and one negative. Read more . . .

This book is a wonderful collection of stories written for a young audience about girls in the Bible who dared to either speak up or work in difficult situations. The author has added beautiful fictional details to the stories so that the reader can imagine what life was like for these girls. She really gives the reader a sense of what the context was for these often-told stories. It's clear that she did a lot of research on the culture of the time. Read more . . . 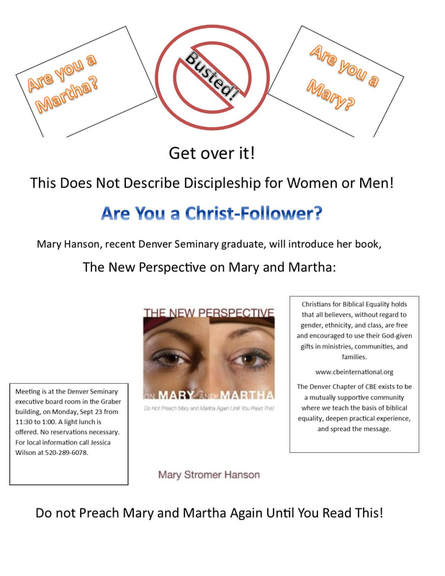 ​Have you revisited Mary and Martha lately (Luke 10:38–42)? You remember their house where Martha is “over busy” making preparations for Jesus’ arrival, and Mary ignores the obvious need to help her sister, preferring to listen at the feet of Jesus. In desperation, Martha appeals to Jesus, the male authority in the house, to get her sister’s priorities in line with the cultural expectations for women. Martha appears to be reprimanded by Jesus while Mary is vindicated. Many times, this story is interpreted as presenting one sister upheld at the expense of the other, preferring women who do not complain.  Read more . . .

When most people read this story, they often imagine a harried housewife complaining about her lazy sister. Jesus’ gentle rebuke reminds his audience to attend to what’s important—his presence. However, Martha is not shown doing housework, and Jesus doesn’t specify what the “one thing...the better part” is. Rather, Martha is a householder who hosts Jesus; she is engaged in much “work” or, better, “service” (Greek: diakonian). By contrast, Luke depicts Mary as a disciple sitting at Jesus’ feet. Both women are engaged in different aspects of ministry, or ways of following Jesus and his teachings. The story illustrates how householders should treat visiting teachers. Mary Stromer Hanson observes that it isn’t even clear that Mary is in the house with Martha and Jesus; possibly, Martha’s complaint is that Mary’s discipleship has taken her away from home.  Read more . . .

Mary and Martha continue to stir up heated dispute in the church, but their contribution to egalitarian arguments appears to have been wrung dry. I propose a new look at the sisters—a look that goes far beyond the tale of a “Mary” trying to fit into a “Martha” world.
The Old Interpretation
The primary takeaway from the traditional interpretation of Mary and Martha is the importance of putting “first things first.” In other words, crumbs under the sofa cushions are a sign of correct priorities. Jesus is said to be admonishing us to cut housekeeping corners for the sake of Bible study.
Let’s examine the usual discussion points. Do we really believe these sisters were too wimpy to settle their disagreements themselves? How would our interpretation of the story change if Martha had been doing work considered more crucial than what has historically been viewed as “women’s work”? Do our stereotypical attitudes towards women and their work skew our interpretation of this text? Does the traditional understanding of this passage fit with Jesus’ theology of service and the use of gifts? Is the traditional interpretation constructive for women?   Read More . . .

Priscilla Papers Vol 26 No 2 Spring 2012: "Mary and Martha: Models of Leadership."
​Leadership in Unlikely Places
If one were seeking nominations for a leadership position, Mary of Bethany, as judged by human criteria for leadership, would not likely be a person to get the nod. Faced with the death of her brother in John 11, she appears to be overcome by nearly catatonic sorrow. Upon approaching Jesus, she falls at his feet and mouths words identical to those with which her sister had greeted him moments before: “Jesus, if you had been here, my brother would not have died” (11:32). Her more vocal sister is the one who takes command of the situation; Martha anticipates Jesus’ entry into the village and approaches him without waiting to be called. In the face of tragedy, she maintains the necessary composure to engage in a theological discussion that eventually results in Jesus’ “I am” statement. Martha’s confession is held up as the equivalent of Peter’s confession in the Synoptics and John’s purpose statement in 20:31.  Read more. . .

Paper for presentation at SBL Atlanta ​

S22-330 Maria, Mariamne, Miriam: Rediscovering the Marys 4:00 PM – 6:30 Nov 22, 2015
Mary of Bethany: Her Leadership Uncovered
My premise is that Mary of Bethany is remembered as a stronger example of early Christian
leadership than previously recognized. Several studies of Mary Magdalene, including one by
Ann Graham Brock, have given Mary Magdalene more accurate and well-deserved attention.1
Mary of Nazareth, the mother of Jesus, has always been the most esteemed Mary. Usually any
character named Mary is assumed to be one of these two Marys. Mary of Bethany is the last to
be considered.
Mary Ann Beavis has proposed in two articles that many of the earliest references to a Mary in
non-canonical texts could actually be Mary of Bethany. She makes the case in her papers of
2012 and 2013 that when a Mary is referenced, and there is no specific indication that it is Mary
Magdalene, or Mary of Nazareth, this could be Mary of Bethany.2 In addition, when a Mary is
paired with Martha, this is most certainly Mary of Bethany.3  Read more . . .
​Notes to Presentation at Society of Biblical Literature: Atlanta 2015


Mary and Martha have drawn strong reactions in countless sermons and devotions over the years. Since the seventh century, this passage was the lectionary text for the feast of the Assumption of Mary. This is but one indication of the importance of Luke 10:38-42 because Mary, the mother of Jesus, is not a character in the text that was read on one of her feast days. Homilies from  as early as Jerome, Origen, Cassian, and Augustine are still available to us. From the medieval period, Meister Eckhart, Teresa of Avila, and Bernard of Clairvaux produced several sermons on the text. The Reformers entered into the fray; they reinforced the work ethic, but not at the expense of the spiritual.Today best-selling authors have popularized the traditional story of Mary and Martha.
Quoting G.B. Caird, “Few stories in the Gospels have been as consistently mishandled as this one.” The text, as usually applied, leaves the reader in a quandary. Each reading raises new questions. According to Jesus himself, Mary is the example to follow, while Martha appears to be reprimanded. Yet, most women have sympathy for Martha. Or, is Martha’s activity good, but she should do less of it? Why does Mary not say anything in her defense? Is a “silent” woman the preferred example to one that “complains?” Is one sister necessarily an example of “good” and one an example of “not so good?”Must the sisters be set against each other?
Why would the “service” that Martha performed on this occasion of Jesus’ visit be considered unsatisfactory. Jesus himself offered extravagant practical service in his everyday ministry. He provided multitudes with abundant food and gathered the leftovers, he changed water to fine wine, and provided a bounteous harvest of fish. Likewise, in the parable immediately preceding our passage, the Good Samaritan provides generous resources to care for the left-for-dead traveler. Why is Martha then criticized for doing what Jesus himself demonstrated as exemplary care for one’s neighbor? What was Martha really doing in Luke 10:38-42?  Read More . . .

THE NARRATIVE FUNCTION OF MARY OF BETHANY:
HER LEADERSHIP OF THE JEWS
Leadership in Unlikely Places
If one were seeking nominations for a leadership position, Mary of Bethany, as judged by
human criteria for leadership, would not likely be a person to get the nod. Faced with the death
of her brother in John 11, she appears to be overcome by catatonic sorrow. Upon approaching
Jesus, she falls at his feet and mouths words identical with those her sister had greeted him
moments before: “Jesus, if you had been here my brother would not have died” (11:32).  Her
more vocal sister is the one who takes command of the situation; Martha anticipates Jesus’ entry
into the village and approaches him without waiting to be called. In the face of tragedy, she
maintains the necessary composure to engage in a theological discussion that eventually results
in Jesus’ “I am” statement. Martha’s confession is held up as the equivalent of Peter’s confession
in the Synoptics and the model Johannine confession according to 20:31.  Read more . . .